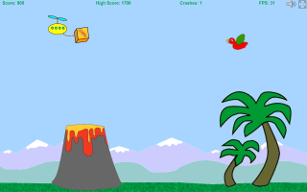 Last weekend at HOGJam #5 we created a new game in less than 32 hours. In Amazon Delivery you maneuver a drone carrying a package through the Amazon jungle while avoiding trees, birds, and volcanoes.


At this game jam I worked on a team with Judy Haber and some help from Michael Crick.

Last time we attended a game jam we worked on a project with too large of a scope, and ended up with a game that wasn't any fun to play, despite having some great work put into it. In attempt to not repeat that, this time we decided to go with a much simpler concept to make sure we could finish it. This worked out well, with the game being mostly completed after the first day.

In the game you control a drone, but your controls are limited to providing a little upward push, similar to games like Flappy Birds. Attached to the drone is a fragile package that must be delivered to a village deep in the Amazon jungle.

The theme of the game jam was "fire," and so any time the drone crashes it explodes in flames. If most obstacles are hit they will also catch on fire, and will remain burning even on future attempts at navigating the jungle. The game is fairly difficult, and so eventually much of the jungle will likely be burning.

After the game jam I made a few small changes. Most notably, I tweaked the level design so that the game is actually beatable. If I got it right, then it should now be possible to get to the end of the map and see the package be delivered.

I feel like this is one of our most successful game jam game projects. While intentionally difficult, it is well balanced, and somewhat fun to play.

Amazon Delivery was written using my own HTML5 game engine. All sounds were procedurally generated from Leshy SFMaker. The fire and explosion graphics were made with TimelineFX. Box2d was used for physics.

I only spent time getting the game running on the desktop version of Google Chrome, so other browsers and mobile devices may not work well. A few quick tests showed that this can run on mobile, though the Box2d JavaScript port makes performance a little jumpy. Android devices also seemed to have issues where certain sounds don't play.

It was great being able to leave the game jam with a complete project, and I think we are getting better at scoping things out to the right size. Normally, as the deadline approaches lots of last minutes changes are made, but this time we managed to get all of the planned features into the game with plenty of time to spare.

Using a tool chain that I knew very well definitely helped. A lot of people use the game jams as opportunities to learn new platforms and tools. That is definitely a great and worthwhile approach, but it really limits your ability to get things done quickly.

For anyone in the Seattle area, this HOGJam has been put on by HouseOGames and Amazon. Future events could be found on the HouseOGames calendar as well as the Seattle Game Developers meetup group.