While reconfiguring a Linksys router I came across the Log section of the settings. It seemed potentially useful to be able to see network activity, so I searched around for information on how to use the settings. Linksys had at some point released software for Windows, but never for Linux. After figuring out what the setting was sending, I decided to write a utility.

The log settings allow an IP address on the local network to be specified as a destination for the log. In order to find out what was going on, I used the Tcpdump packet analyzer, which revealed that when the log was enabled, UDP traffic was coming in on port 162. This meant it was likely SNMP trap data. From this I wrote a little test program and was quickly able to extract the messages from the packets.

The packets seem to occur only for TCP and UDP traffic. A packet is sent when a connection is initiated, and the message doesn't necessarily mean that a connection occurred. For example, a TCP SYN only port scan against your router's IP will result in a packet for each port that receives a SYN, regardless of whether a connection is ever established. The packets are sent by UDP, and when the router is under heavy load, a lot of messages do start getting lost, so this shouldn't be considered a reliable logging technique.

While this isn't perfect and it doesn't provide a lot of details, it still is a handy way of getting a picture of what is happening on the network. You can find out things, such as what servers are contacting your router on the internet. If you put an appliance on your network, you can use this to see what traffic goes in and out of it, or how often it calls out to external servers. You may also use this to discover if anything is using your network that you aren't aware of, such as an unwelcome wifi user.
Download LinkLog from GitHub

Enabling Logging on the Router 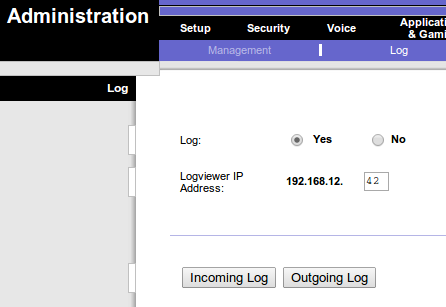 On the Log page the "Log" option must be set to yes, and the "Logviewer IP Address" should be set to the address of the host that LinkLog will be running on.

Not all Linksys routers support logging to an external host. If the "Logviewer IP Address" option is missing, then it may not be possible to use LinkLog with that router. It is possible that updating the firmware may add the missing option. Switching to an alternate firmware may provide other types of logging options.

The official Linksys utility for viewing these logs is no longer easily available, which leads me to wonder if newer Linksys routers have stopped supporting this feature.

LinkLog is a stand-alone Perl script. It may be run from any location, or be installed by copying it into a directory in the path, such as a bin/ or sbin/ directory. There are no other dependencies than Perl. Only core Perl modules were used, so any Perl installation should work. This was written for Linux, but will likely work on other operating systems.

In order for LinkLog to work it must listen on port 162. In the Unix world, any port below 1024 is considered privileged, and so root access is required to launch LinkLog. If this is not acceptable, LinkLog may be setup to listen on a different port by using the --port option. For example, in Linux, traffic can be forwarded with iptables: Be aware that with the port forwarding enabled, any user on the system could potentially listen on the destination port.

When filters are used, only traffic matching the filters will be shown.

If multiple filter arguments are used, the results will be ANDed together. This means that only traffic that matches each rule will be displayed.

Filters may use * as a wildcard. For example:

A template string may be passed to the --template argument in order to change the output format. The above tokens will automatically be replaced with the described value. The default template is:
%t [%i, %p] %s:%S -> %d:%D

After seeing the output in Tcpdump, I quickly threw together some Perl code to extract the message. Each relevant message had a string in it that began with '@in' or '@out', and then followed a consistent format. I decided that instead of implementing proper SNMP parsing, I would just extract the parts through a regular expression. I try to avoid having dependencies, and so I didn't consider any SNMP modules. I'm not sure if there is other useful information in the packet, but the string alone seemed to provide everything needed.

Once the proof of concept worked, I added in some command line argument parsing via Getopt::Long as well as the remaining features. Everything came together really quickly and easily, and the end result is a program that feels like it fits in well in a Unix-like environment.

For anyone wondering why Perl was chosen, the primary reason is because I knew that I could get this entire project done with all its features in just a few hours in Perl. I'm a big proponent of Perl, and while familiarity definitely plays some role in the preference, Perl naturally feels like home to Unix and C programmers, and I think that is a huge advantage over many similar languages.

When it comes to style I made a few notable decisions that altered the design. Only Perl core modules were used. This means that any Perl installation should have everything needed to run the program, and users don't have to installing anything from CPAN. It also means it will likely work with Perl installs on other operating systems.

I chose to write this as a single script. It could have been broken down into modules and written differently to be a little more clean, but I thought there was more benefit to making it trivially easy to install and use, rather than breaking it apart, since this isn't a large program.

This program is available under a BSD open source license. The latest version may be found on GitHub.
Download LinkLog from GitHub