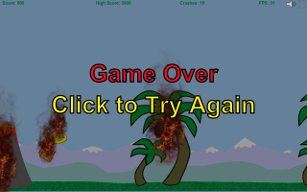 A couple of days ago we released an intentionally difficult game jam game that we made last weekend called Amazon Delivery. I wrote a little about the making of the game here.

During the game jam we had some people play test the game, and I was constantly told it was too difficult. I was hesitant to change things, because it was supposed to be difficult. I was reassured I was on the right path when one person managed to do really well on their first try, no doubt from having a lot of game playing experience. The problem was most people had trouble getting past the first or second obstacles.

During the jam I adjusted the difficulty multiple times, each time making it easier. When I released I thought I had a decently balanced, though extremely difficult game, and I thought that was what I wanted. Unfortunately, almost all the feedback showed that people still weren't getting very far, and even worse, they were giving up quickly.

I remedied that by adjusting the map to make things much easier, but still the negative feedback continued. I started to question how difficult the difficult game should be. Beginners at Flappy Bird have trouble getting scores above 5, but many experienced people can get hundreds of points. Running a few feet in QWOP is difficult, but there are people out there that have learned to do extremely well.

I think the problem with difficult games is that most players will just give up immediately, and so it could be hard to build up a decent following. QWOP succeeded in part because of its original dynamic. People were willing to put up with the difficulty because it was unique. In QWOP it was even fun to watch failures.

Amazon Delivery isn't unique enough to be that difficult and still interest people. It definitely is not a Flappy Bird clone, but it fits into that genre. Maybe had I not adjusted things, eventually someone would have come along and beat the game, but based on all the feedback I became worried that nobody would even find it at its current level of difficulty. Most people weren't returning, and the game wasn't likely to be shared for its uniqueness.

So far the average player stays on the page for 1 minute and 51 seconds. Of the people that go to the page, 91% have not returned. This isn't terrible, especially for a difficult game, but I'd like to see people playing longer and sharing it on social media more.

When making this game I decided to use slightly more realistic physics than is often found in this type of game. I'm not sure if most people noticed, but when you clicked to gain lift in the prior version, the downward momentum was not removed. This meant the faster you were falling, the less lift distance you gained. While this may be realistic, for most people it just seemed to make the game a little more unpredictable. To remedy this, I now remove any downward momentum before applying force, making the physics more video game like, instead of realistic.

In the game there is a rope attached to a drone with a package hanging on the other end. The package wildly swings around, and occasionally collides with things causing you to lose the game. To make things a little easier I reduced the length of the rope. The package still swings around a little wildly, but is closer to the drone, and so easier to manage.

Several people wanted the game to feel more like Flappy Bird in the amount of lift the you gain from a click. I wasn't interested in duplicating anything from there, but I took the feedback and adjusted game play a little. It is now possible to click slightly more often, and each click gives you a little less lift than before. This makes it much easier to control the drone and maneuver around obstacles.

After making these changes on average I'm able to make it about twice as far as I tended to make it before. I still haven't managed to make it through the waves of birds without crashing yet, but I verified that it is definitely possible.

This game was made for fun at a game jam, and I have no expectation that it will soar in popularity. It is an intentionally difficult game, but these changes do make it much easier, and my hope is that being a little easier will make it accessible to a much larger audience.

Click here to play Amazon Delivery
Be sure to reload the game's page in your browser to be certain you are running the latest version.

After making the changes discussed in this blog post, I felt good about the balance of the game. Most people still seemed to think it was too difficult, but being intentionally difficult was part of my design. I wanted to show that it could be beaten, so here is a video I made of a winning run through the game.